Looking closely at a granite countertop it is easy to distinguish three types of minerals with a naked eye. Small black dots are mica, clear and irregular ones are quartz, while yellowish, brownish and grey ones are feldspar. These three components are present even in the smallest piece of granite. When the Romans noticed that granite was made up of grains, they gave this natural stone its name which in Latin means grainy.

Granite has served as a great construction material through centuries and millenniums. The oldest granite buildings are over 5,000 years old! That old is The Red Pyramid of Egypt, so called because of its reddish granite surface. The red granite sarcophagus found in the Great Pyramid of Giza is not much younger. Some pyramids built from granite of other colours have also survived in Egypt. The Egyptians used granite for columns, doorposts, lintels, window sills, walls and floors. Isn't it amazing that many of these elements have survived to this day?

Granite is one of the hardest and most durable natural stones used in construction and in home decoration. This dense, strong and resistant rock is common everywhere on earth. In terms of hardness granite can be compared to quartzite and basalt. All these rocks have a Mohs score of 7. Because of its resistance to external influences such as moisture, cold, abrasion and sudden temperature changes, granite is widely used outdoors. It is a great material for constructing large buildings and roads, for paving public squares or cladding house facades. Granite is also widely used for kitchen countertops. Granite floors, staircases, bathroom vanities and fireplace surrounds look beautiful both in private and in public areas. Such surfaces at home can last for decades.

How granite is formed

Granite is an igneous intrusive rock. This means that it formed when magma (a viscous mass made of silicon and oxygen) flowing up from the depths of the earth cooled down before reaching the surface. The cooling magma trapped in cavities and crevices of the earth's crust blended in with its elements. High pressure and high temperature caused the magma and the rocks to fuse together, which resulted in a new material. Granite makes up most of the continental crust. Generally granite deposits are found on continents at depths of 1.5 km to 50 km. Steep granite outcrops can be seen at mountain summits. In some places weathered, bare granite mountains stick out in the wild.

Granite is generally composed of multi-coloured grains whose dominant colour can range from white to grey, pink, black, green. In addition to feldspars (orthoclase or plagioclase) and quartz, which make up the base of granite, it also contains biotite, muscovite, and occasional particles of magnetite, zircon, apatite. The hardness of granite can vary, because it depends on the ratio of feldspars to quartz in a given block. Granite has between 20% and 60% quartz by volume, and at least 35% of the total feldspar, although the term granite is used to refer to a wider range of coarse-grained igneous rocks containing quartz and feldspar. By inspecting your worktop through a magnifying glass, you might notice microscopic red dots. Those may be traces of garnets or even rubies! Isn't it amazing that granite grains bonded together by nature millions of years ago still hold onto each other today?

Although magma has been squeezed and trapped in the Earth's crust during all geological periods, most granites come from the Precambrian age. It began 4.5 billion years ago and ended around 542 million years ago. This period of time covers about 90% of the total Earth's history. The Earth itself is only half a billion years older than the oldest granite layers (which count almost 4 billion years). Granite is the Earth's most abundant bedrock, with only a thin sedimentary layer above it. Other natural stones used in interiors (except basalt) lay on granite like in a giant bed!

Did you know that granite is a common geological source of radiation in nature? It contains about 10-20 parts per million of uranium. This characteristic distinguishes granite from other stones used in interiors, as their natural radiation is hundreds of times weaker than granite. Many large granite deposits contain uranium ore inclusions into which uranium is gradually washed from higher granite layers. Even if so, you don't have to worry - although granite radiates stronger than marble or quartzite, it is generally not an acute health hazard and is not a significant risk factor. Daily ventilation is sufficient to prevent the build-up of radon gas in homes and offices.

Where granite is found

The largest commercial granite quarries are in Finland, Norway and Sweden, northern Portugal, Spain, Brazil, India. It is also quarried in several southern African countries, such as Angola, Namibia, Zimbabwe and South Africa.

How granite is quarried

Granite mining companies blast granite deposits using explosives and separate granite blocks from the bed by powerful machines. To separate the granite block from the main body, rows of parallel holes are drilled into it. Explosives are placed in the holes and the lump is carefully blasted. It is important that the explosion is strong enough to separate the granite block from its bed, but gentle enough not to crush it. The rough granite blocks are then transported from the quarry to warehouses by heavy machines where they are nicely cut into slabs of desired thickness, most often 2-4 cm thick. Then the slabs are transported to stone fabricators' workshops. The professionals cut the slabs by diamond saws to custom orders and polish them by stone polishing machines. Finally, granite worktops, window sills, floors and stairs appear in your home.

Granite is used for

How to clean granite

Although granite is less porous than marble, granite surfaces need to be treated with stone sealers every 12-24 months. Granite worktops that are not sealed will absorb liquids and develop stains. It is advisable to clean granite with very soft cloths. Do not use harsh sponges and do not use acidic cleaning agents, vinegar or lemon. Avoid any kind of ammonia or bleach. Frequent use of chemicals can change the colour of granite worktops and weaken the effect of the the sealer. The harsher the cleaner, the faster it will dissolve the sealer and damage the surface of the worktop. It is best to clean granite worktops daily with warm water and a microfibre cloth. 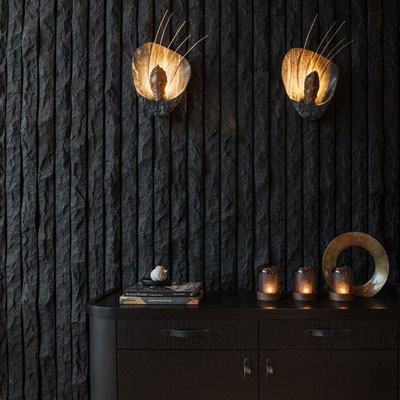 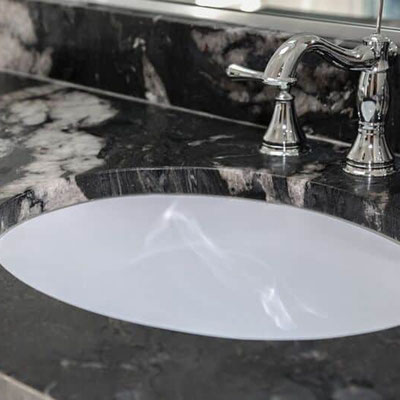 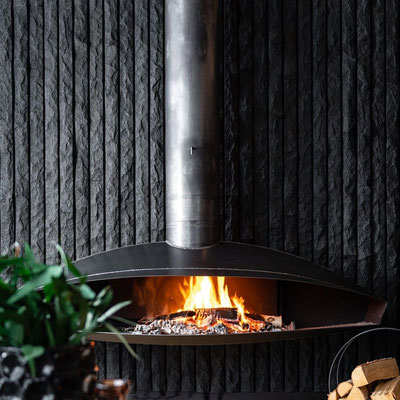 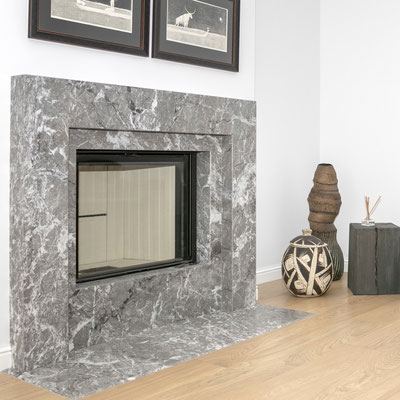 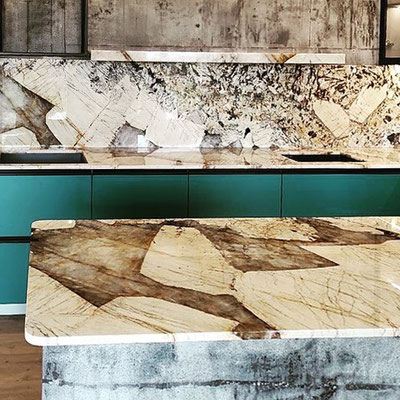 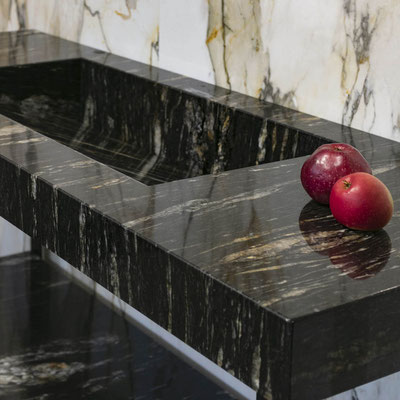 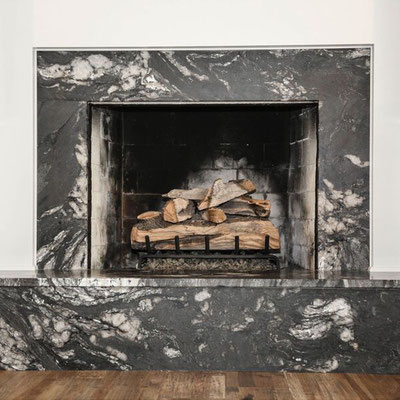 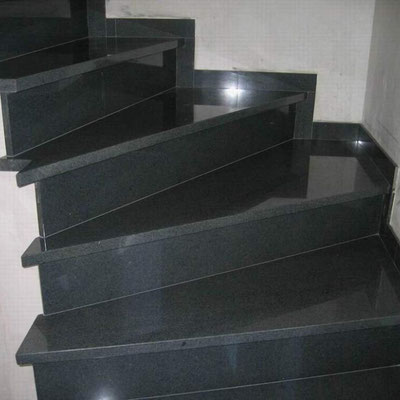 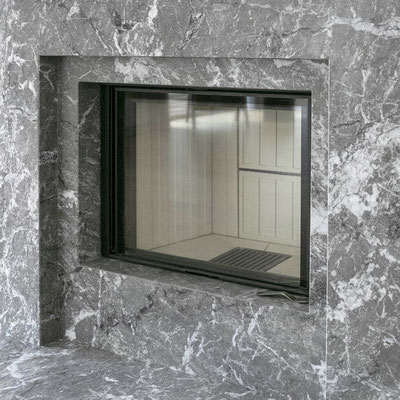 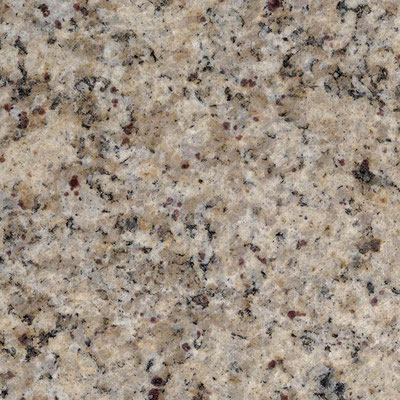 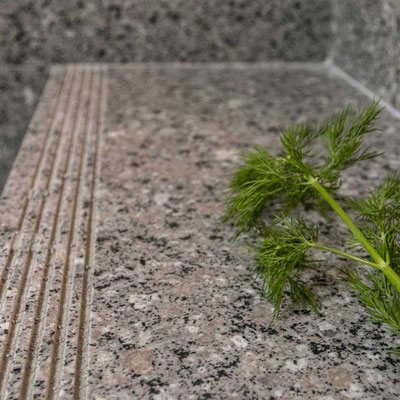 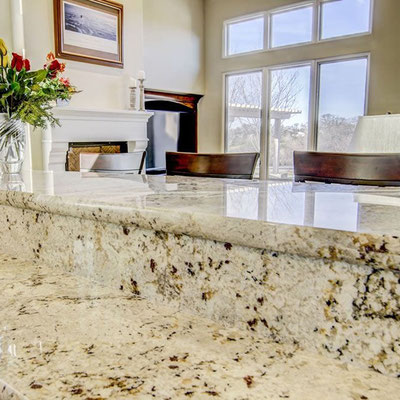 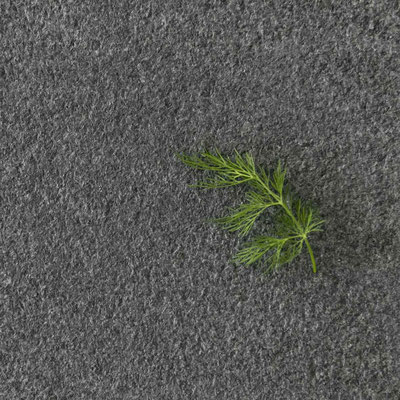 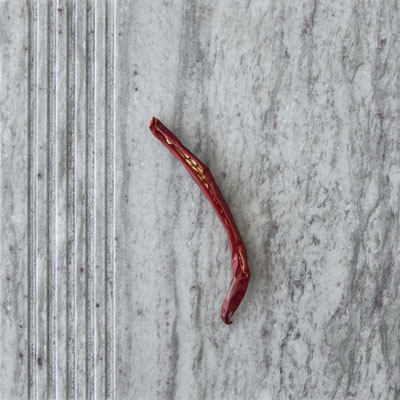 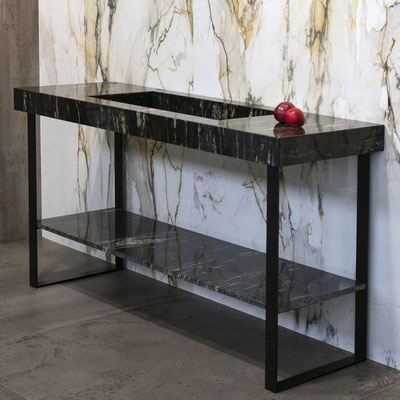 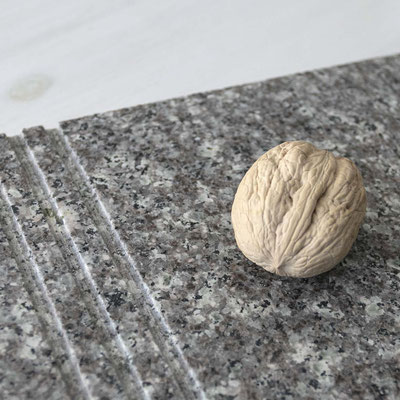