If you choose travertine for your stairs, floors or walls, you are thinking like the ancient Romans. They used travertine to build houses, temples, aqueducts, monuments, bath complexes, amphitheaters and anything they could invent. The world's largest travertine building is the Roman Coliseum. The ancient name for travertine, which is Lapis Tiburtinus, refers to the Tibur village near Rome, where large travertine quarries were located. The Italians have been travertine's fans for centuries. Check out some beautiful travertine colours and patterns by famous travertine suppliers:

Travertine is frequently used in Europe and elsewhere as the building material. A distinctive feature of this natural stone with Roman soul are tiny natural holes. When travertine blocks are cut into slabs, these playful holes are either filled with a transparent sealant or left open. Interior designers praise travertine for its modesty and neutrality. It is often used by architects in those private and public spaces where conservative and reserved luxury is to be achieved. The beauty of travertine becomes even more apparent with time.

Travertine's tiny holes make it easily distinguishable from other decorative stones. After cutting travertine into slabs these playful holes are either sealed by a transparent sealer or left open. If the final travertine product is going to be vertical, like a wall, the tiny holes look perfect without sealing and are not going to cause a discomfort. Horizontal surfaces, like bars and countertops, should rather be sealed.

Because travertine is lightweight and quite soft, it is easy to cut and work for stone professionals. This stone has a non-slippery surface, which is why it is often used in public facilities, water parks, swimming pools, spas. Travertine is soft, warm and pleasant to touch. Being quite neutral in appearance, it fits for different interior styles, be it modern, classical, eclectic or Provencal. The price of travertine slabs is lower when compared to many other stones.

When travertine deposit is cut horizontally, the slices open up in swirling, flowing patterns. Vertically cut travertine slabs reveal linear patterns. Each travertine slab has unique colours and shades, no two slabs are the same. The surface of this stone is usually matt, soft and warm. It is comfortable to walk on, pleasant to touch and easy to maintain.

Travertine products can be polished to a high gloss or just lightly honed. The stone surface can also be brushed, which means that the natural cavities can be rounded and highlighted in a special way. The edges of worktops can be straight, carved, rounded or purposefully left uneven. Travertine tiles can be used outdoors to pave courtyards and pathways.

How travertine is formed

Travertine is a type of limestone that is formed in hot mineral springs all over the world. This porous sedimentary rock is often adorned with beautiful veins. Although calcite, the base mineral in travertine, is white, travertine rarely comes in its pure form and colour. Even the smallest amount of impurities such as sulphur, iron or organic residue can dye travertine brown, red, yellow, orange, beige.

For travertine to form, water saturated with carbon dioxide has to pass through limestone and dissolve it. Such water absorbs calcite particles and carries them away until the environmental conditions change, i.e. the pressure drops, the temperature drops or both drop. Carbon dioxide then starts to evaporate from the water, just like the gas starts coming out of the bottle of fizzy drink when it is open. Freed from carbon dioxide, calcite regains its form and settles down on everything around. Dust, microscopic animal remains, algae and moss become covered in calcite. Plants continue to grow on this layer, but it gets thicker and thicker, finally devouring them.

There comes a time when such layers become old and dry, forming a stone-like appearance. If the layer is lightweight, the holes are big and the formation looks sponge-like, it is called calcareous tuff. If the holes are small and thin, and the stone is hard and heavy, it is travertine. Travertine has a hardness of 4-5 on the Mohs scale. Sealing travertine is highly recommended as stain removal can be limited due to its chemical sensitivity.

Where travertine is found

Travertine is most often found near the mouth of hot springs and streams. Deposits of dried and hardened travertine were quarried by the Romans in Italy. Travertine is abundant in Turkey, Mexico, Iran, Peru. The main countries of travertine consumption are Italy, Greece and Turkey. In the Plitvice Lakes National Park in Croatia travertine has formed 16 large natural pools. The water in them is surrounded with calcite-covered mosses and rocks. Over several millennia, travertine waterfalls grew up as high as 70 metres. There are also beautiful travertine pools in Pamukale, Turkey. Colourful travertine deposits can be seen in places where geysers stream out from the ground.

How travertine is quarried

In mines, travertine blocks are separated from the bulk mass in several ways: by drilling many parallel channels into it with special machines and by separating, sawing off the pieces with wire saws, chainsaws or water jets. After drilling rows of vertical and horizontal holes with channel drilling machines, wedges are driven into the holes to separate the block so that it can be pushed away from the quarry wall. In winter, freezing water is used to separate the block.

The blocks are also cut with large chainsaws with diamond blades, several metres in length. Wire saws are used to split them into smaller pieces for transport to warehouses or workshops. Diamond cables are inserted through drilled holes and attached to the saw to cut off the bottom of the ingot so that it can be neatly pushed away from the overall mass. Water jet cutting machines cut the ingots by spraying water with special abrasive sand into them in a powerful jet.

travertine is used for

How to clean travertine

Like other natural stones, travertine is porous, which means that it absorbs liquids. It is recommended to seal travertine surfaces with stone sealants. This especially applies to worktops and those surfaces that are frequently touched. Stone sealants can also be used to enhance the intensity of travertine colour and pattern or to give it a gloss.

travertine examples in interior and exterior 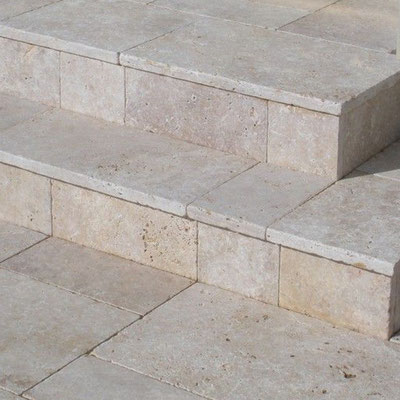 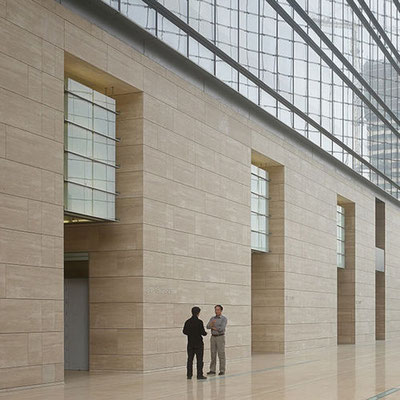 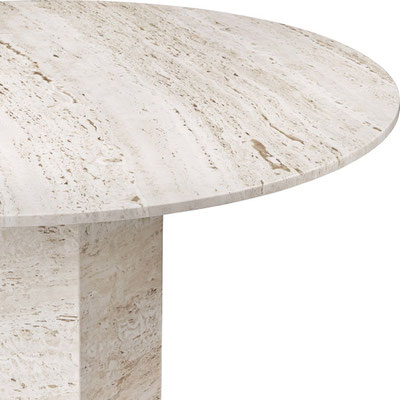 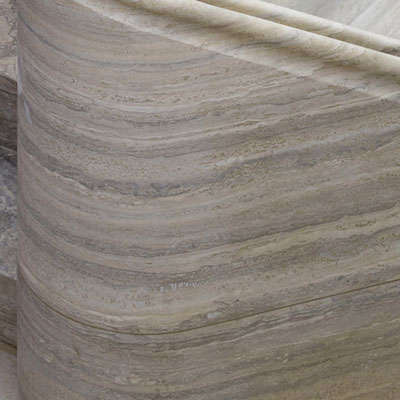 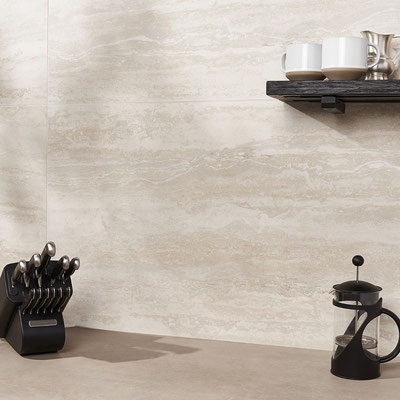 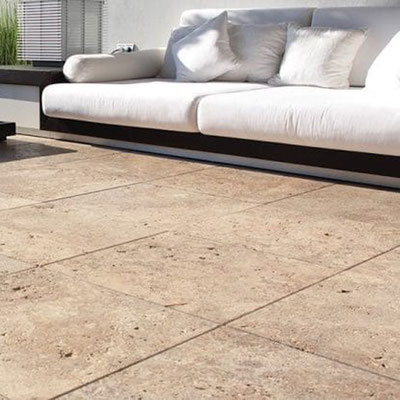 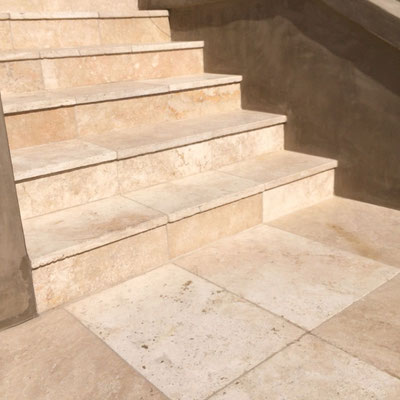 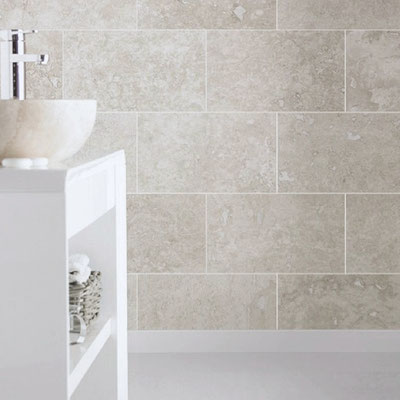 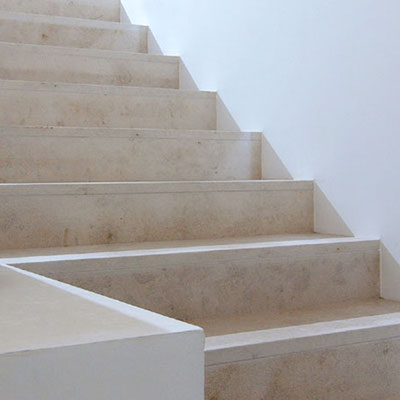 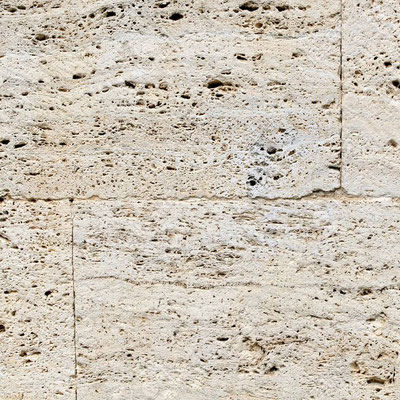 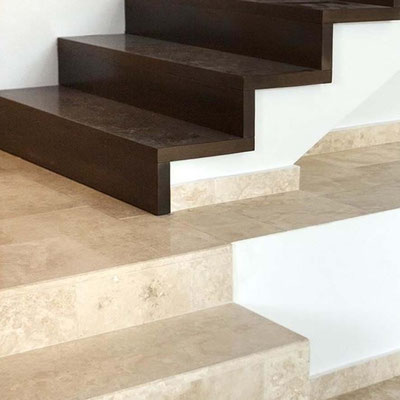 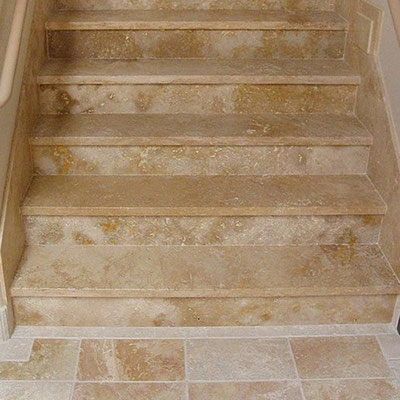 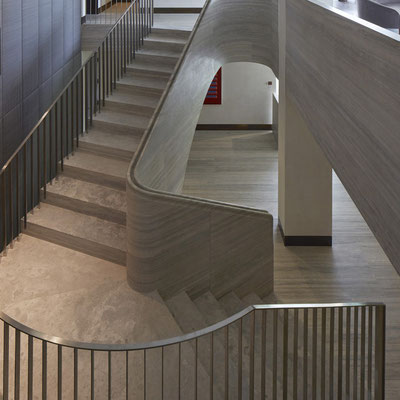 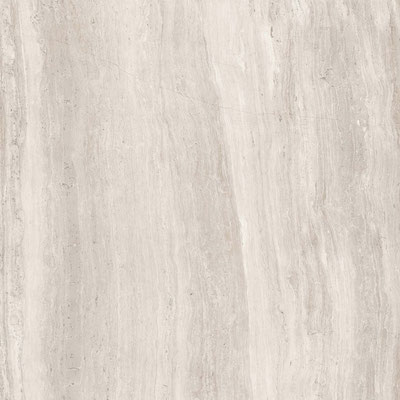 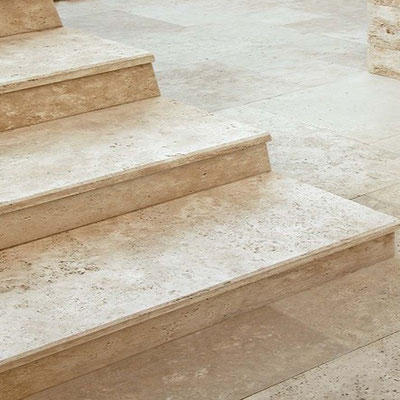 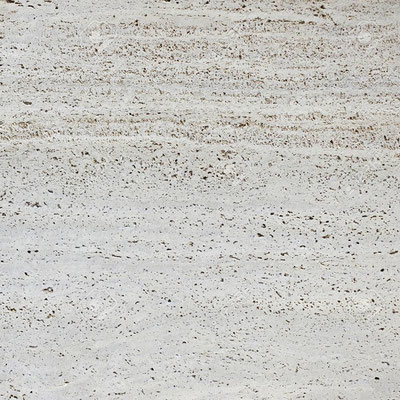 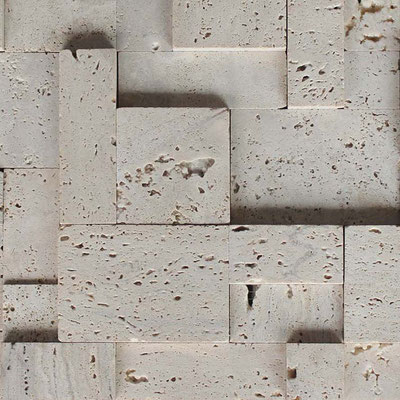 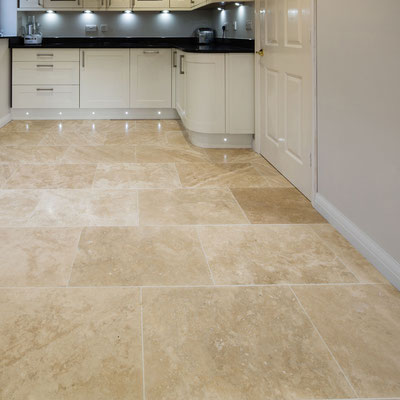